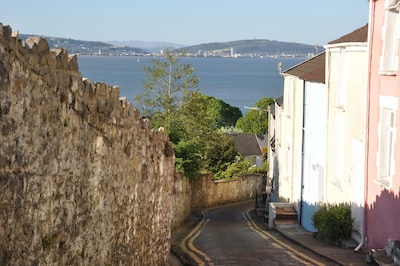 Sleeps 3 people in 2 bedrooms, with linen and pillows provided. But also a sofa-bed downstairs which does not have linen or pillows provided. Use that if you want to for any reason, but please keep it clean and remember to bring your own linen, sleeping bags, pillows or whatever. No cot provided for infants so again, bring your own if you will need one.

I was born on The Gower but I spend too much time away now, sailing on South Coast or doing export work (Europe), and with my scattered family in the UK. So I can't usually meet and greet you :( I'm on a UK mobile though (find the number in the house, I can't put it here) and you can phone me if you get stuck with anything. The changeover cleaning lady is a friend, only 2 streets away, and her number is in the house as well. We come home to Mumbles often. Don't be afraid to let me know if something doesn't work, because if I know about it I can fix it.

Alan Goss purchased this Cottage in 2010

It was a mess when I bought it. However, I liked the view and the proximity to the sea. It is so compact and yet neatly organised, that it reminded me of a ship's cabin somehow. Not that I've ever lived in a ship's cabin, I've only seen the sort of thing I'm talking about on films! It was built between 1835 & 1840, pre-dating cars, electricity, the land registry, damp-courses and probably the water and gas supply. This is one of the 3 oldest streets in Mumbles. All the people who lived in it, were either fishermen or quarry workers. They used to paint the wall opposite with lime-wash. If you look closely, you can still see traces of it. That wall originally enclosed a convent "St Anne's" (St Anne's day is July 26th), then later a hotel, and the the flats you see there now. It is because it was built to border the convent, that Village Lane only ever had one side to it. The houses number up sequentially from the bottom, on the one side. Although Nos 1 & 2 were demolished and replaced by a larger house, and Nos 3 & 4 have been combined by an internal joining door, the rest of the houses are more or less original. The other reason I wanted to live here is because my grandparents, my father, his sister and some of my cousins, lived in the large house you can see in Western Lane (look up village lane, and slightly right) during World War 2. But that was not for sale and I couldn't have afforded it anyway, so I plumped for this one in Village Lane instead. From this part of the bay, I can look out across it and identify all the other parts of Swansea where I, my various antecedants and 50 or so assorted living cousins once lived or live now. After travelling a lot in my life and living overseas a few times, it sort of settled me to come back and find a place like this.

It is VERY common to hear owls hooting in the nature reserve behind the garden. It's also common to see seals on the rocks in the nearby beaches. It's less common to see dolphins, but keep your eyes open and you might be lucky. I should say to guests from overseas, that everybody in Mumbles starts their conversations in English, not Welsh. You'll be fine if you speak English, which is the dominant language here. If you want to speak Welsh though just do it, and you might be surprised by how often people will respond in Welsh. There are places only 10 miles away where Welsh dominates instead - but the people there also speak English so you'll still be ok using that. If you do one thing while you're here, get in the sea. It doesn't matter how cold it feels as you enter it, and it doesn't matter if it's raining and blowing a gale. When you come out again, you'll feel warm and tingling all over and the wind won't even touch you. You'll have become invincible!