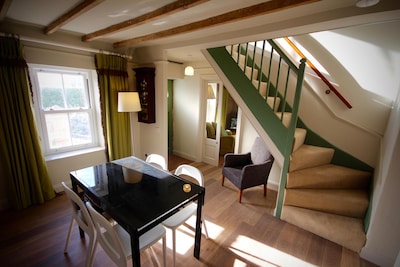 Description of sleeping capacity: Sleeps up to 5 (3 Bedrooms) Notes on bedrooms: Bedroom 1: Double divan bed. Bedroom 2: Twin 2'6" beds (can be linked to form a king size but please let us know your requirement when you book). Bedroom 3: Single bed made up if required or dressed as a daybed when not in use. NB: Bedroom 3 is accessed via Bedroom 2

My childhood was full of freedom, sunshine, fresh air, of being near the sea, beaches and big open skies. Having lived in London and Bristol for many years, I would yearn to be back and would be happy to spend time trekking in and out to get those few precious days on or near the coast and return home relaxed and replenished. It has been a long term ambition to be within a stones throw of the beach and the sea and one day I just woke up and thought it's time to make this happen - so, as they say, 'Where there's a will there's a way' and it has proved to be one of the best decisions I've ever made!

Richard Nash purchased this Cottage in 2010

Burry Port is easily accessible from the M4 but this part of the coast is relatively unknown and therefore hasn't been overdeveloped or spoilt. There's a strong sense of community spirit in the town which shows through the great friendliness and hospitality extended to all. The golden sandy beaches are fantastic especially at Pembrey Country Park and Cefn Sidan - plenty of level cycling, walking and beach-combing with something different to see on every occasion; the bird life, light, sea, even sand yachting! If you feel like exploring further afield there is a host of different day trip locations; houses, gardens, towns, waterfalls, beach coves.

The cottage was owned and lived in by four generations of the same family and has retained much of its original quaintness, character and charm and it has a very relaxing atmosphere. Its great to wake up in the morning and peak out at the views of the Gower and if the wind is in the right direction hear the sound of the sea. Kids love the garden -originally planted for self sufficiency in veg but now lawned and ideal for running around or clambering the old apple tree. Its a true hotspot - hence the canvas curtain over the front door (as the paint was burning off) and when the weather is balmy a great place to catch the last of the sun with an evening drink or barbecue. Happy Holidays!