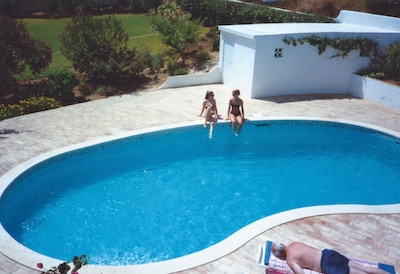 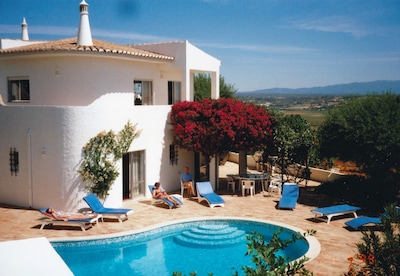 single (2)
only available when extension is booked as optional extra.

I have lived with my husband in Weybridge for over 30 years. Our daughter and husband live nearby with their young son and baby daughter. I was a Brown Owl for 19 years (!) and also a Governor of a special school. I now run a beginners bridge group for U3A, and very occasionally walk dogs for the Cinnamon Trust. We have recently acquired a middle aged Norfolk terrier called Peggy, who is a little gem

Doreen Purefoy purchased this Villa in 1984

We first visited the Algarve in 1979 and instantly fell in love with the area and the people. We first stayed in Carvoeira and considered buying there but sadly realised that this charming little fishing village was about to be swamped by development. We then explored further west and after several visits to the area decided that Lagos was sufficiently large and predominantly Portuguese to avoid being swallowed up by developments. Then began the search for a villa nearby rather than in the town itself which can be noisy with barking dogs and late night bars etc.! We were extremely lucky in that the first villa sent to us was in just the right location, just 1 mile from the very centre of town with fantastic panoramic views of the ocean and mountains and yet in the peaceful countryside.

I doubt there are many villas in or around Lagos that combine convenience of access to the many shops, bars and restaurants the town has to offer, with such blissful peace and quiet. We sit gazing at the views for hours both day and night and never tire of returning to Miradouro. The children love the pool,which can be heated in early and late season at extra charge when the water temperature is a mite too chilly except for the most hardy. The villa is very baby friendly as we provide cot, high chair, monitor, bottle warmer, steriliser, even a few toys and a potty!