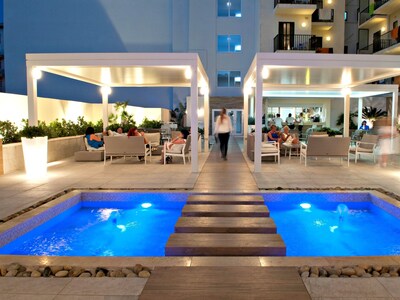 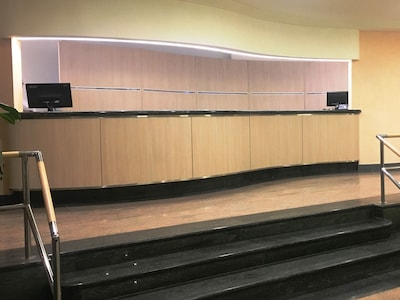 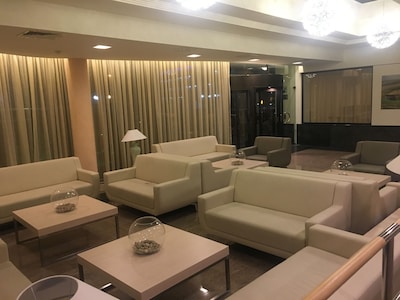 This hotel looks tired and was very much like staying in a retirement village. Our room had the basics but smelled really bad, sulphurous. The fan looked like it was about to fall off the ceiling and decapitate us at any point, and had two settings - pathetic, or too noisy to sleep. The most disappointing thing was our double bed consisted of two singles pushed together... so much for a romantic getaway!

Good base from which to explore the island from. A liitle old fashioned in places but. clean and helpfull staff.

Roof top pool very cold even after being heated by the sun all summer.

Towels in the room had seen better days.

View from our room was horrific a building site.

Good location, near shops and restaurants

My Sister and I stayed at this hotel recently. Having requested a twin room, on arrival we were given a small double room. The reception found us a twin room which was bigger and acceptable. The carpets in the corridors and in the room were in very poor condition, stained and worn. The furniture looked worn too. The bathroom light fitting was hanging off the ceiling. The worst thing was, the patio door wouldn't open properly, it took two of us to move it. Then as we were unfortunate to have wet weather all week, during a thunder storm the water started to drip inside the room. This happened at midnight, so we put a towel on the floor and reported it to reception the following morning. We were told maintenance would go and have a look. We went out for the day, coming back, out room had been cleaned, but the sopping wet towel was still on the floor. Having reported this to reception we were offered another room, a smaller twin, which we accepted. The staff were efficient in sorting out rooms, but this hotel is really struggling to be a 4* hotel. The indoor pool which is only heated in winter (not mentioned on line) would have been a nice distraction from the rain, and the Jacuzzi was cold too, I thought at least this should have been warm. All said and done, we did enjoy our break despite the weather, but the Santana could do with a makeover.

Hotel staff are excellent and welcoming.

We have stayed at this hotel both times we holidayed in Malta this this year. Staff at this hotel are excellent being friendly and helpful. Location wise the hotel is within walking distance of Buggiba. I would have no hesitation in recommending this hotel as a good place to stay when in Malta. We will be returning again next year.

First impression, lovely hotel, clean and comfortable. Easy access by walking to Bugibba Bay which has good restaurants, bars and shops. Also really easiy to get around by bus, as the bus station was close by.