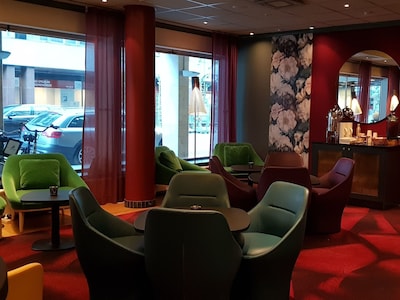 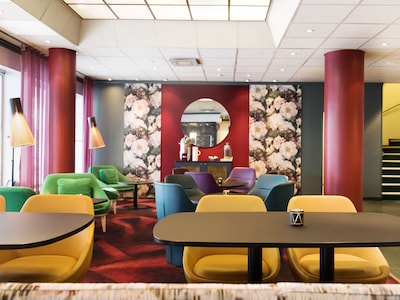 Good hotel with a touch of Scandinavian austerity

It is a good hotel with a touch of Scandinavian austerity in the design of rooms and common areas but great breakfast and helpful staff.

The hotel staff is amazing. Very polite and accommodating. The rooms are small and basic. I saw a sign that there were renovations to be completed this fall; I wish I would have asked to see a room. The bathroom is small and needs updating. The room and bath were extremely clean. The breakfast was fantastic! My favorite part was having a washer & dryer down the hall for free use, great for a short stay!!

WOKEN DURING THE NIGHT

First night slept ok. Second night was woken by a terrible noise. I thought it was a train going by. Then, when it did not stop I thought it was some other industrial noise. I couldn't sleep. I went to the window and closed it. This made no difference. I went around the room trying to locate the source of the noise. I couldn't fine it. After half an hour, I went in to the corridor. The noise could be heard down the whole length of the corridor. It was a high pitched whine. I went to reception and found the night porter. He knew instantly what the noise was, as it was an ongoing problem within the hotel and they were hoping to have it rectified soon. He stopped outside our room, reached to the ceiling and did something to a valve that was presumably faulty and had been making the noise since - presumably - the boiler had been fired up to heat the morning's water. Didn't really get back to a decent sleep. Asked for a refund of one night in the morning but the manager was unavailable to approve. Was provided with his e-mail address and contacted him shortly afterwards. There was no response. The hotel should not place guests in a room which is affected by a terrible noise in the middle of the night,when the source of the noise is right outside their room and is known about by the hotel. Very poor customer care.

The hotel is in the center and a 10-minute walk away from the central station.It's easy to walk around the sites.