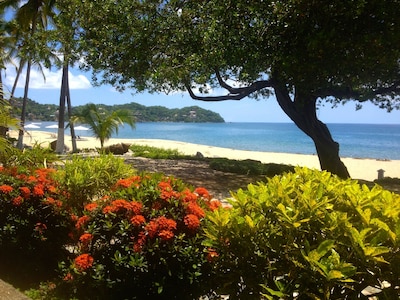 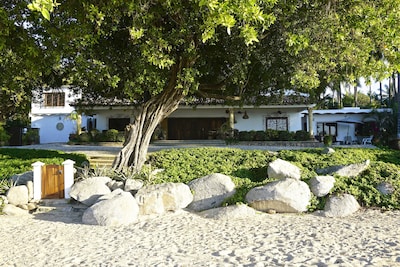 Best Beachfront House in Sayulita: Hacienda right on the sand!

super king
The King bed can be converted into 2 single beds,

Bedroom 3, is called the Eagles Nest

super king
Living Room can be a 5th bedroom

If the living room is requested in advance to be set up as a 5th bedroom, the house can have 5 king sized beds plus 2 extra single beds in either of the largest bedrooms. Or, all but one of the king beds can be separated into 2 single beds so that alternately we can provide up to 10 single beds plus 1 king bed, or any combination in between.

For many years I was an editor of motion pictures and television in San Francisco, Los Angeles, and New York. My wife is a fine artist/painter who grew up outside of New York City and spent her summers at their beach house on the Jersey Shore. My wife's family are Canadians who live all across Canada from Montreal to the Canadian Rockies to British Columbia. Our daughter grew up in California, loves to swim and now that we have a house on the beach in Mexico, she became fluent in Spanish and she even learned to surf.

Richard Harkness purchased this House in 2001

Although we have traveled all over the world to places like Bali, Hawaii, Guatemala, Europe, El Salvador, Canada, both coasts of the USA and many places in Mexico, we didn't get to Sayulita until 2000. It was the perfect little fishing village that we had been looking for, where the food is good, the local people are friendly, it's a quick easy flight from the USA, and it was the prettiest curve of beach we had ever seen. By 2001 we went back to buy a vacation home and found this perfect house right on the beach. My wife Sharon loved the classic hacienda style of the house and all the elegant antiques that came with it. My daughter Heather loved the fact that it was right on a soft sand beach where she could swim and play, and I loved that I could see two fabulous surf breaks that I could stroll down the beach to surf, within sight of the house. Less than a year after we purchased it, we loved it so much that we decided to live there full time, which we did for a year and a half to seize the opportunity to immerse ourselves in the culture, learn Spanish, and really get to enjoy this fabulous spot. We now live in Santa Barbara and visit the warm tropical waters of Sayulita as often as we can, but since we can't be there year round, we like being able to share it's pleasures with others.